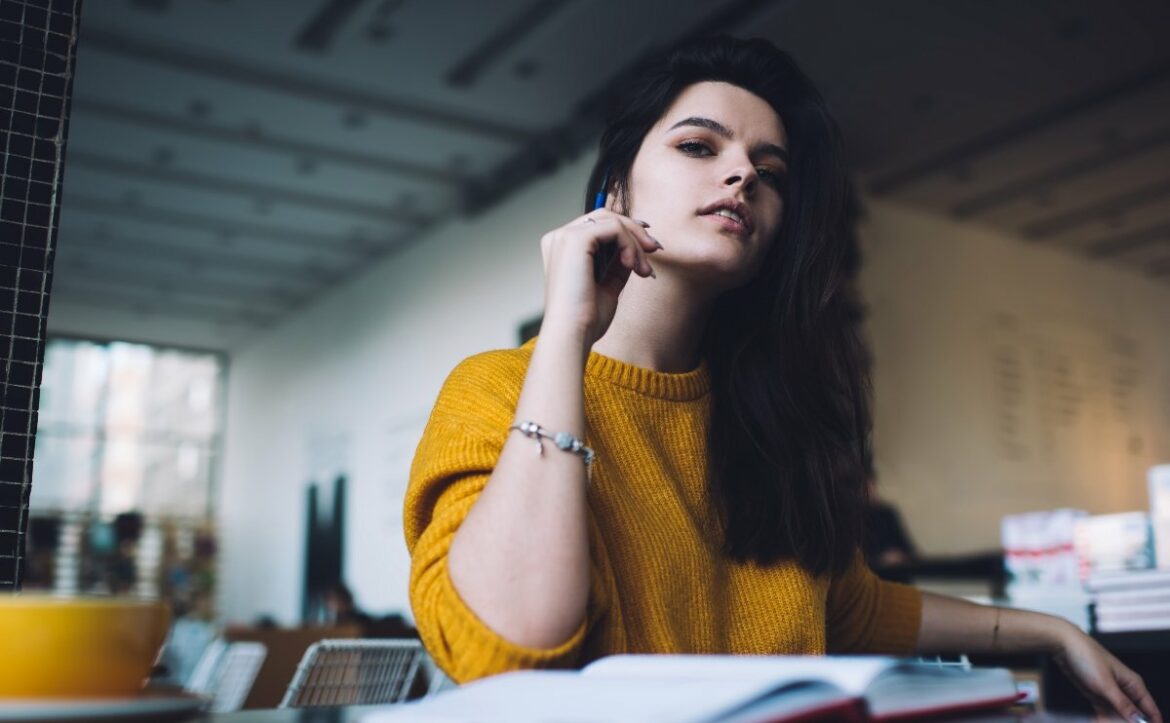 Here’s what the roundabout poem type is:
The roundabout is a twenty-line poem comprised of four quintains.
The meter of the poem is iambic, though its length changes from line to line.
The poem also features refrains unique to each verse, but its most interesting quality is the way the rhyme scheme comes ‘back around’ to the first end sound.
If you want to learn all about roundabout poems, then you’ve come to the right place.
Let’s dig in!

What Is the Roundabout? The roundabout is a metered stanzaic form with a simple but unusual premise that the rhyme scheme should come full circle (thus the name).
It features many of the basic building blocks of poetry, scrambled together to create a unique structure.
This form doesn’t have a prolific history dating back to the beginning of time or anything, but it is interesting in a completely different way.
The roundabout was conceived by a mentor-student team, Sara Diane Doyle and David Edwards.
Some of its first mentions seem to have been on Poetic Asides (where Sara Diane Doyle was the 2008 Poet Laureate) and on Writer’s Digest.
While the form hasn’t seen any major movements yet, it does benefit from the advantages of being born in the fast-paced digital age.
Namely that poem forms can spread faster in this era than in any previous historical period.
What Are the Basic Properties of the Roundabout?

Rhyme StructureStrictMeterIambicOrigin21st century; mainly spreading digitallyPopularityToo new to gauge, but use so far has only been sporadicThemeVaries
How Is the Roundabout Structured? The roundabout features four quintains (five-line stanzas) for a total of twenty lines.
The poem is entirely in iambic meter, though the length of the meter changes with each line.
The first line uses tetrameter, the second trimeter, then the third and fourth both use dimeter, before the last line comes back up to trimeter.
This is one of the first elements of the poem that “comes around” with the lines becoming longer and shorter in a vaguely cyclical pattern, though it’s really the rhyme scheme where things get more interesting.
There are only four end sounds for the entire poem.
The rhyme scheme is abccb bcddc cdaad dabba.
This may initially look random but try looking closer.
The internal rhyme scheme of every verse is abccb, with the actual difference being that the second verse starts at the previous one’s second rhyme.
It’s in the third verse where the rhyme scheme starts to go back around.
If we continued the pattern from verse one to two, then verse three would logically be cdeed, but since we’re intentionally cycling back to the beginning it is instead cdaad.
The last verse then reintroduces b, allowing the rhyme scheme to come full circle, in a sense.
One oddity of the poem, supposedly introduced by Doyle, is a repeated line.
The second line of each verse is reused as the last line of the same verse.
So if we account for refrains the rhyme scheme can be fully written as aBccB bCddC cDaaD dAbbA, where the capital letters represent refrains and the lowercase letters represent non-repeated lines.
What Is an Example of a Roundabout? At night we soar beyond this place
to fade away from here
somewhere so far
beside the stars
to fade away from here.Our freedom seems so very near
as if just past the clouds
but more than miles
in fading style
as if just past the clouds.We pursue it though, just as proud,
as we have ever been.
We leap through space
as full of grace
as we have ever been.And all the things that we have seen
will help us to keep pace
Despite our tears,
our hopes and fears
will help us to keep pace.
Reading the above example out loud should give you some idea of the unusual effect of the poem.
As the name would imply, there’s a playful feeling that the poem’s structure is cycling in on itself, emphasized by all the refrains.
But the refrains do more than just draw attention to the nature of the structure.
By including refrains, the number of unique lines the poet has to write utilizing each rhyme is reduced. While this effect may seem unimportant, veteran writers will know how a rhyme scheme with just one extra use of an end sound can drastically inhibit creativity.
Too many repetitions of the same end sound can make a poet feel less like they’re creating art and more like they’re playing a glorified word game, so the refrains here are quite welcome.
This is actually one of the major reasons that forms from the Romance languages (IE. French, Italian, Spanish) don’t always translate well to English.
So while it’s unclear if Doyle realized this when adding the refrain, it absolutely contributes to the poem’s overall charm, both for readers and writers.
Take special note of how many times the first end sound of the poem is used.
A grand total of FIVE times, though one of those is thankfully a refrain.
While you can get away with more complicated rhymes for most of the poem, I do recommend choosing a word that’s easy to rhyme with for the first line of the poem, for this exact reason.
What Are Tips for Writing a Roundabout? I would personally mark this as an intermediate form, based on difficulty.
If you’re not fully comfortable with working in meter and rhyme scheme, then this wouldn’t be the best form for you to jump into right away.
It’s certainly no villanelle, but the form does have some hurdles that will be easier to handle if you review the individual concepts first.
Of particular note is how the varying line lengths can easily trip you up when working with the rhyme scheme.
The shortest lines just happen to have the closest rhymes, and rhymed dimetric couplets are fairly demanding already.
Adding the reused end sounds to the mix only cranks this up to a level of challenge that those new to working with rhyme may find quite frustrating.
The meter, ironically, ends up being the easiest part once you’re sufficiently familiar with working with the meter.
Iambic meter is the most natural meter to write in for English poetry, for better or for worse, so you’ll find that a surprising number of lines will come naturally as long as you pause frequently to vocalize them.
Vocalizing in a form like this is incredibly important.
While some writers are able to think phonetically with practice, others may find it helpful to always recite metered lines out loud so that they can listen for parts that sound off.
If you’re still hazy on what stressed and unstressed syllables are, then I recommend reading some modern metered poems out loud to yourself for reference.
(Shakespeare will NOT help you learn meter, since you might not intuitively know how those ancient words are pronounced! Learn from MODERN examples!)
The individual elements of the poem are really all at a beginner level, but that’s only before you start combining them. A lot of the complexity of poetry comes from taking these basic building blocks and rearranging them into new structures that haven’t been built before.
This form is an excellent example of how simplistic individual techniques can come together to make something much more complex than the sum of its parts.
Regardless, stick to it.
Formal poetry is a great exercise for your brain, and it tends to create poems that have an enduring musical quality to them.
While it’s fine to write most of your poems in free verse, I do believe that any poet with professional aspirations should at least learn the basics of formal poetry, so that they have some ideas for what they do and do not look for in the structure of a poem.
Poet’s Note

I cannot stress enough how the simple act of adding refrains to this form rescues it from being far too difficult for the average student writer.
Having too few rhyme sounds has kept a lot of otherwise interesting forms from ever achieving widespread success, and refrains really are a clever countermeasure.
What Are the Most Important Types of Poems?