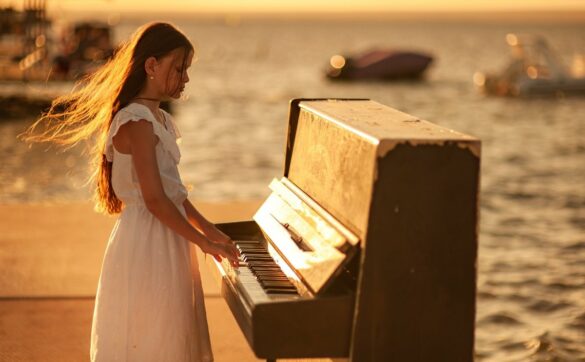 Here’s what the roundelay poem type is:
The English roundelay is a stanzaic verse form that uses rhymed sixains and extensively employs refrain, almost to the exclusion of any unrepeated lines.
Roundelay can otherwise refer to a short simple song that employs refrains and neither should be confused with the unrelated American “rondelay” poem form.
If you want to learn all about roundelay poems, then you’ve come to the right place.
Let’s get to it!

What Is the Roundelay? Technically speaking, a roundelay can also refer to a short simple song with a refrain, but here we’ll be talking specifically about John Dryden’s proposal for the roundelay poetic form, sometimes called the Dryden roundelay or the English roundelay.
The English roundelay is a stanzaic form with four rhyming sixains (six-line stanzas) that are usually metric, historically speaking.
They were most commonly written in trochaic tetrameter, though iambic meter has also been used before.
The most unique element of the roundelay is not its meter or rhyme scheme, but its heavy reliance on refrains. In fact, only 12 of the 24 lines are actually original, with a full half of the poem taken up by refrains.
What Are the Basic Properties of the Roundelay? Rhyme StructureStrictMeterUsually trochaicOriginJohn Dryden, 17th centuryPopularityFairly unpopular among writers but appears consistently in textbooks and manualsThemeVaries
How Is the Roundelay Structured? The roundelay has an alternating rhyme with only two end sounds.
This means that the rhyme scheme of each verse will always be ababab.
It’s important that the rhyme scheme use only two end sounds since the extensive use of refrains means that many lines reappear in other verses throughout the poem.
The lines have a very exact pattern of repetition, with only the first, second, twenty-first, and twenty-second poems being unrepeated.
The full scheme of the poem, including refrains and the rhyme scheme, is abA¹B¹A²B² A¹B¹A³B³A²B² A³B³A4B4A²B² A4B4abA²B².
And yes, I am aware it looks more like an algebra equation than a poem, but that’s just how the refrain notation looks.
Due to the intensely complicated structure, it’s advisable to keep a written copy of the structure in front of you when writing your first few roundelays.
Dissecting the logic behind the form’s structure honestly takes significantly longer than just writing down the above sequence (or copying and pasting it because we live in the 21st century).
It may feel like cheating, but if Dryden wanted it to be easy to remember then he should have designed it that way.
Note that there is a completely unrelated form called the rondelay.
These are not the same poem and share a few common elements, so take special note of the spelling.
While a roundelay would have been expected to be metric in Dryden’s era, because it was a generation of dreadful elitists who expected literally every poem to be metric, that condition has been loosened in recent generations.
It’s ultimately up to the writer what meter they will use in the poem if any, though there will be purists who argue that the poem should always be exclusively metric to remain true to tradition.
What Is an Example of the Roundelay? Who better to turn to for our example than the inventor of the form?
The first thing you might think if you’re anything like me is, “Dear God that’s too repetitive.”
Aside from that observation, the form does have some interesting quirks when employed intelligently.
Take a closer look at the lines and you might notice something interesting about the lines that don’t repeat.
The first two lines set up the setting and positioning of the characters immediately so that the name of the dying Amyntas never needs to be repeated again, while the other set of unrepeated words, lines twenty-one, and twenty-two flip the meaning of a segment on its head.
Up until those two specific lines, our only image of Chloe is of her “laughing at his crying” and telling him that “he loved in vain.”
It’s not until those two lines, used only once, that we get a quiet glimpse into another side of her as they kiss before he dies, easing his pain as requested.
In other words, while the bulk of the poem is repetition, the entirety of that repetition ends up revolving around how wisely you can employ the four extra lines you’re given to work with.
To no surprise, Dryden pulls that off magnificently.
What Are Tips for Writing a Roundelay? There are three main considerations to take note of, going into your first roundelay.
First, the rhyme scheme will not be easy. At all.
Even with the extensive use of refrains, you still only have two end sounds to work with.
In the English language, this is pretty miserable, since there are so many words that have only a scant few other words to rhyme with.
As a consequence, it’s best to choose words with common suffixes, or words that just have common end sounds in general.
It’ll be a lot easier to make your roundelay work if the last word of the first line is “cat” than if that word is instead “orange.”
Thankfully, the refrains do take a bit of the edge off, since you won’t actually need to repeat each end sound a full 12 times, technically speaking.
The refrains take up so much of the poem that they actually whittle away several moments in the rhyme scheme for you, and you’re going to appreciate that more than you might initially realize.
On the topic of refrains, this is where we get into our second major consideration.
Will you create a complicated network of lines that have different meanings depending on where they are in the poem or will you write each line to be independently understandable, so that the rearrangements don’t make your verses incomprehensible?
If you just go into the refrains blindly, you’ll end up shooting yourself in the foot, so think seriously about what phrases and sentences can be repeated at different points and still mean something.
Third, what meter will you employ, if any?
The trochaic meter has the advantage of getting every line off to a strong start, while the iambic meter does a good job of punctuating the lines so that they feel self-complete. This may end up going hand in hand with how you choose to structure your refrains, so make sure you think about what meter works best for your decisions.
Or, if you’re feeling rebellious, don’t use meter.
It would still be wise to maintain isosyllabic lines (or close to it) so that your rhymes don’t feel unnatural, but you do not technically need to use meter if you don’t want to.
It is YOUR poem, after all.
You could potentially spend an hour agonizing over how your roundelay is going to work on its most fundamental levels, even before you start writing, which should give you some idea of where this particular form rests on the difficulty scale.
It is really, truly, not a form that should be taken lightly.
The end result might seem bouncy, rhythmic, and fun but the poet working on the poem has to endure quite an ordeal to get to that point.
Poet’s Note

In the interest of full disclosure, I have zero interest in this form. I’ve never liked refrains and probably never will.
Some poem forms manage to use refrains in new and interesting ways, but the Dryden roundelay really just seems to throw in as many refrains as it can just for the sake of having them.
You can tell at a glance that this form materialized at a time when works were valued based on their difficulty rather than their mainstream appeal.
What Are the Most Important Types of Poems?